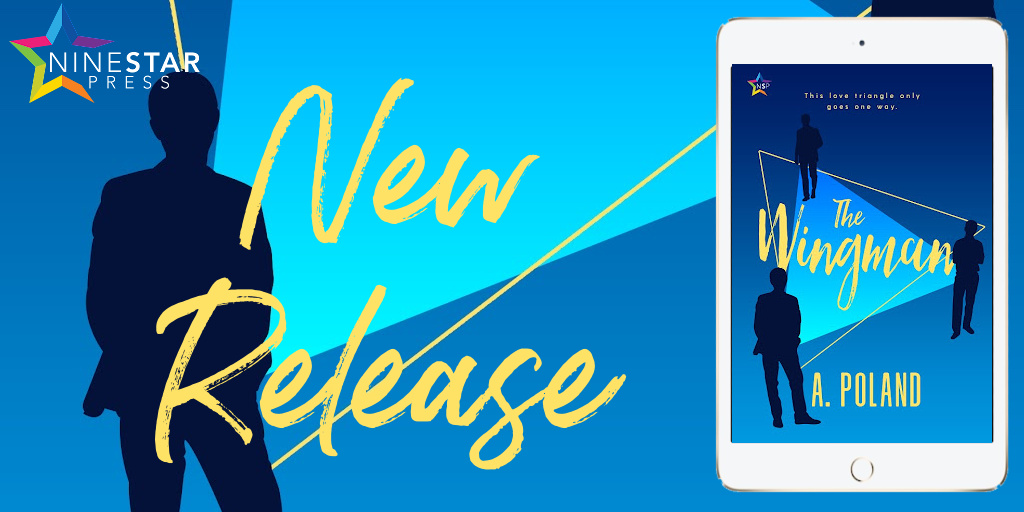 Nathan, a college student with a thing for funky hats and a definite not-thing for the great outdoors, has been a wingman extraordinaire for his lifelong best friend Lorcan for as long as either can remember. With his innate ability to talk endlessly about how great Lorcan is to anyone who’ll listen, Nathan has always been the best man for the job—even if he’s secretly waiting for the day when Lorcan will realize that Nathan is the only guy for him.

But then, Lorcan sets his sights on Miles, the suave, leather-jacket-wearing musician with a love of mountaineering and a family of six overprotective sisters, and Nathan must once again put his wingman skills to work.

Trouble is, Nathan is getting tired of the old routine, and Miles is the only human being on the planet immune to Lorcan’s charm. Not to mention that Miles’s interest is immediately piqued by the outspoken and completely oblivious wingman.

Nathan Reed was convinced LAX had expanded since he’d last stepped foot in there.

What else would explain the endless stretch of white corridors, covered in signs advertising various transport options? Not to mention the bright Welcome to Los Angeles! posters plastered every few yards for those with the attention span of a goldfish who somehow forgot where they were.

But Nathan wasn’t likely to forget. He’d been looking forward to this for weeks now, ever since he’d booked the flight.

Not that his year abroad hadn’t been enjoyable, but there were things he’d missed so much that homesickness snuck up and ached like a rotting tooth.

Things like his dad’s cooking or having his own room. Privacy had been hard to come by at Saint Andrews, and Nathan hadn’t realized how much he’d miss it. His dad’s apprehensive looks when Nathan had shown him pictures of the apartment, kitted out with a set of bunk beds, now made sense.

His roommates had been nice, sure. It had taken a while for Nathan to fully understand the thick Scottish brogue, but once he’d arrived there, he’d gotten on well with the other guys. Granted, sleeping in the same room as two other people for a solid nine months had been a lot.

There’d been so many noises he hadn’t anticipated.

But above all else, what Nathan had missed most was his best friend, Lorcan.

Inseparable since birth, their mothers had been close friends, so it was expected they would be thick as thieves. Just as likely was that they’d have eventually grown apart over time, fallen into new friend groups, and developed different interests.

Lorcan had always been a widely liked guy, even when he was a kid with chubby pink cheeks and a toothy grin. Naturally charming, he never had a bad thing to say about anyone. Which was an exact juxtapose to Nathan, who had no issue airing his grievances about someone (to Lorcan, of course—Nathan wasn’t exactly confrontational).

As they’d grown older and their attraction to people was brought into the mix, they’d helped each other out.

While Nathan might not have been the greatest at getting dates for himself, getting them for Lorcan? That was where Nathan’s true talent shone through.

One of Nathan’s greatest skills in life was selling Lorcan to people.

Obviously not for money, not that Nathan would have said no to the option (college was expensive, okay?), but Lorcan’s gratitude was enough payment for him.

And he had every reason to be grateful, considering the majority of Lorcan’s hookups came as a result of Nathan chatting to a pretty girl at a bar or in the crowd of one of Lorcan’s basketball games.

Lorcan was easy to talk about. If half of Nathan’s college essays had had Lorcan as the subject matter, he’d have hit the word count, no problem, and with zero caffeine needed.

Hell, Nathan could fill an entire anthology about Lorcan. And he was confident it was the same in return.

Studying in Scotland for a year sure as hell hadn’t changed anything about their closeness. Skype calls had been frequent, texting even more so when they were both conscious. Sometimes, Nathan would stay up obscenely late just to talk to Lorcan, in the privacy of the bathroom while his roommates snoozed away.

And neither could a thirteen-hour-long flight.

But it sure as hell had tried to.

Dragging his overly stuffed suitcase behind him, the one functioning wheel shrieking in protest, Nathan slogged through what had to be the last of its airport pilgrimage. The suitcase had served him well through the year, but now it was squeaking its last squeak.

Nathan briefly considered holding a Viking funeral for it. He quickly shook that idea off and reminded himself he’d been conscious for over twenty-four hours and burning suitcases was not a productive activity.

Blond hair plastered to his forehead, the backs of his knees sweaty, and his shirt more than a little stale—Nathan was in desperate need of a shower. The sign for Arrivals was up ahead, which meant he wouldn’t have to stew in his own grossness for much longer.

“Oh, there he is!” an all-too-familiar voice called the moment Nathan slipped through the sliding doors, his last barrier separating him from the outside world. Unable to stop the broad smile on his face when he saw his entourage gathered there, Nathan picked up the pace.

Nathan’s father, a perpetually cheerful man by the name of Ben, stood there with an expectant grin on his face. Maybe they had once looked similar, but with Ben’s hair loss some years ago, it was difficult to draw a comparison between father and son.

Bouncing excitedly beside him was none other than Lorcan, who’d called out. Beside Lorcan, his two younger stepsisters unenthusiastically held out a large white sheet heavily decorated with glitter and stickers. Nathan’s name was the centerpiece, so there was no mistaking who they were there for.

Not that Nathan could ever have mistaken them.

It had just been Nathan and Ben for as long as he could remember. In contrast, Lorcan’s mom had remarried a few years ago, inheriting two little girls from her partner’s previous marriage.

And Sally and Emily adored Lorcan.

Not that that was in any way surprising.

Fuelled by a worrying tea addiction (with a tattoo to prove it), A. Poland is a romcom writer from Ireland who delights in telling stories that make you fall in love with the characters and give you that squee feeling in your chest.

Three words she would use to describe her writing are: funky, silly, and spicy. Which, coincidentally, is also her dancing style.

When she’s not daydreaming of the next meet-cute, A. works as a video producer and a full-time dog mom to her pride and joy, Gizmo.